Origin and distribution: Ghana Sanga, also called Sang, Pseudo-Sanga, or Ghanian Sanga is the product of interbreeding (composite) between the Ghana Shorthorn (but sometimes the N'Dama) and zebu (commonly White Fulani, occasionally Sokoto Gudali) in northern Ghana. Ghana Sanga is a more recent and specific cross-compared to the general cattle group called sanga, which comprises long established zebu x humpless derivatives represented by several breeds in Eastern and Southern Africa. The breed is located in drier areas of Ghana towards the northern border and on the Accra Plains extending into Volta Region.

Physical characteristics: The animals are small and have variegated coat colour. The head has a long, straight and convex profile. Horns are variable in size and slender in shape, mostly small and U-shaped. The neck is short and sturdy. The hump is rudimentary and usually inconspicuous. The back is short and concave with an elevated rump. These cattle are mostly solid black, although black pied and brown pied coats are also common. Height at withers is 110-115 cm.

Peculiarity: The lower reproductive efficiency coupled with smaller size of the West African Shorthorn and N'Dama has made cattle farmers to shift in favour of the larger Ghana Sanga. Ghana Sanga resembles the shorthorn type more closely than it does the zebu, but like zebu it is found in the drier areas of the country.

Breed status: The total number of Ghana Sanga cattle in Ghana was estimated at 201 430 in 1993 and their number is increasing. They constitute 76% of the cattle used for milk production in the smallholder dairy herds of the Accra plains (Obese et al. 1999). They are not at risk as the population trend is increasing (DAD-IS 2005) but there is no programme for conservation of the breed.

Utility: The Ghana Sanga is used both for dairy and beef. They are bigger than the Ghana Shorthorn; their birth and mature weights are 24 kg and 320 kg, respectively [CS 1.9 by Aboagye]. Okantah (1992) has reported that average partial daily milk in 1266 observations in 13 smallholder agro-pastoral herds of Ghana Sanga was 875±11 g. According to Obese et al. (1999), interval from calving to resumption of ovarian cyclic activity, open days and calving interval in 76 cows were 101±7, 152±4 and 444±16 days, respectively. A study on 10 cows in the Accra Plains indicated that the average lactation milk yield was 244 kg with butterfat percentage of 4.1% and average lactation length of 300 days (DAD-IS 2005). 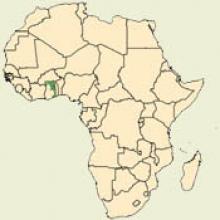 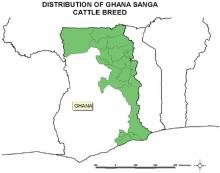