Origin and distribution: Botswana is the epicentre of the Setswana cattle. The Tswana people settled with their livestock in Ngami region of Botswana early in the 19thcentury and their cattle eventually displaced practically all the original Ngami animals (Rege and Tawah 1999). Hence, the most typical Tswana cattle occur mainly in the north and northwest of Botswana in Ngamiland and along the Boteti River. Tswana-type cattle extend into the southwestern Zimbabwe. In South Africa, they were originally found in the Northern Cape of Transvaal. However, the breed is well distributed throughout the country.

Physical characteristics: Although rather heterogeneous phenotypically, today's Tswana cattle have long lyre-shaped horns, well-built, well-fleshed, with moderate to long legs. They are multi-coloured and have many colour patterns of black, brown, grey and white, the typical ones being red and red-and-white.

Peculiarity: Tswana breed has a high level of tick and heat tolerance and is known to adapt to dry and hot environments. Animals of this breed are fertile and the females are known for ease of calving and the quality of hides is good.

Breed status: The estimated number of Tswana cattle in Botswana was 1 950 000 in 1994. No information is available on their number in South African and Namibia. The purity of the Tswana breed is declining due to crossbreeding with Brahman and EU breeds (DAD-IS 2005). There is need to conserve the breed by keeping the minimum required number of breeding females from being crossed.

Utility: Main uses of Tswana cattle are beef, milk and draught power. The commercial sector uses them for crossbreeding with the exotic dairy and beef bulls for improved milk and meat production, respectively. They are fertile. The calving percentage is 70 to 81%, which is greater than Afrikaner, comparable to Tuli and less than the Bonsmara. The average age at first calving of 36-48 months and the calving interval of 18-24 month is common in traditional herds, and this is due to stress from long suckling periods of a year and above. Calf mortality is about 7.5%, which is better than that for Afrikaner and similar to Tuli (Mpofu 1996).

The Tswana out-perform other South African breeds including Tuli and Afrikaner in growth traits but have lower growth rates than the Bonsmara and its crossbreds (Table 1). Mature weight of male animals is 310-520 kg and that of females 290-420 kg (Lethola 1983; DAGRIS 2005). Mature weight for male animals is 700 and 450 that of females (DAD-IS, 1995). The average daily milk yield of a Tswana cow is 1.4 kg. The productivity index expressed as 18 month calves weight per unit metabolic weight of a cow is found to be higher for the Tuli, followed by the Tswana. The breed is known to produce quality hides (Mpofu 1996).

Table 1. Performance of Tswana cattle compared to that of various breeds and Tswana 2-way crosses for beef production traits 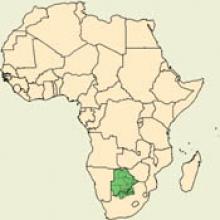 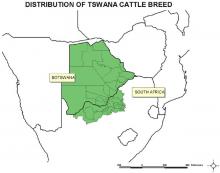