Origin and distribution: Why not briefly mention something about the other strains of Funali cattle, point out their relationships, and may be distributions then zero in on the Whilte Fulani? The White Fulani cattle are mainly owned by the nomadic Fulani people who occupy the belt between the Sahara and the rainforest from the west of the river Senegal to the east of Lake Chad, including parts of western Senegal, Southern Mauritania, in and around the flood plains of Niger, Chad, northern Nigeria (Kano, Zaria, Borno and Bauchi States) and Cameroon. There are two schools of thought about the origin of the White Fulani cattle breed. One is that the White Fulani are truly long-horned zebus, and this assumption is due to appearance of a distinct hump in a newborn bull calf, and the characteristic nature of skull and thoracic vertebrae. The other one is that the breed resulted from interbreeding first between the short-horned zebu and the ancient Hamitic longhorn and/or shorthorn to result in a sanga breed, and then interbreeding these sanga with thoracic humped zebu animals could have resulted in cattle with lyre-shaped horns including the White Fulani (Tawah and Rege 1996).

Physical characteristics: The coat colour of White Fulani is commonly white on a black skin with black ears, eyes, muzzle, hooves, horn tips and tip of tail. Their thoracic or sometimes intermediate hump and dewlap are well developed. The head is long, wide across the forehead and with a straight or concave appearance; average adult wither height is 130 cm; the neck is strong providing an upward carriage for the head; horns are slender, medium to long (81 to 107 cm), lyre shaped: curved outwards and upwards, with an outward turn at the tip (Faulkner and Epstein 1957). The White Fulani are generally taller and narrower bodied cattle; the rump is of good length but has a marked slope from hook to pin bones. The udder is well-developed, of a good shape and strong attachment. Teats are well positioned and are of medium to reasonably large size (Tawah and Rege 1996).

Peculiarity: The general shallowness of the body and lack of width give the breed a leggy appearance. This characteristic of the breed has been described as an adaptation to long distance trekking in the pastoral management (Tawah and Rege 1996). The breed is of interest in that it is more tolerant to heat as compared to N’Dama and Gudali, more resistant to dermatophilosis than the Muturu and N’Dama breeds, resistant to intestinal helminth parasites, and has low mortality rate. Although it is less resistant to trypanosomosis than the N’Dama, it is more tolerant than the Gudali and other zebu types (Tawah and Rege 1996).

Utility: The White Fulani are used for milk, meat and draught although the traditional owners keep them mainly for milk. Their dairy potential is better than most zebus, and is comparable to Kenana of the Sudan. Average lactation length is around 220 days. Although the total lactation milk yield ranges from 627 to 1034 kg, the yield expressed per unit body weight would give them good milking rank. Mean butterfat percentages range from 4.10 to 7.50 (Tawah and Rege 1996). Their conformation and body size make them suitable for draught. They are good beef animals, which fatten quite well in feedlots and on natural pastures. The average birth weights computed in the different regimes range from 18.2 to 24.2 kg; mature weight of bulls and cows in the improved system of management is 350-665 and 250-380 kg, respectively (Tawah and Rege 1996). Feedlot studies indicate that these cattle can achieve growth performance of 1 kg per day. Slaughter and carcass weights of 325 and 166 kg were reported in well-finished steers. The dressing percentage is reported to be 50-60, average age at first calving 40-49 months and average calving interval 403 days (DAD-IS, 1995; Tawah and Rege 1996). 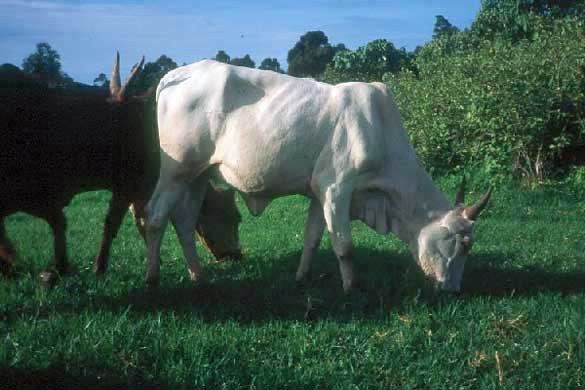 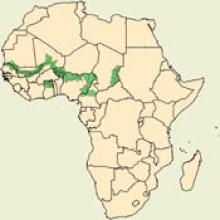 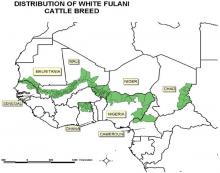